The whirring sound of a helicopter in the mountains conjures a feeling of dread. A feeling that deepens when you spot the helicopter sidling around the peaks, dragging a long winch with something unidentifiable attached. When this happens in Mount Cook, two possibilities run through our minds:

Best case scenario: The helicopter is dropping off clean water, gas and supplies to the mountain huts. Or perhaps it’s carrying out last month’s toilet deposits from hut visitors…well, it all has to go somewhere!

It’s the latter we’ve learnt most about in the last couple of days. Not because we’ve had any problems, but because we met a guy who spends most of his time rescuing people. And, even more amazingly, we just so happened to meet someone he rescued.

We met Ray up in the Richmond Ranges a few weeks back. He was tramping with his daughter, Amber, on one of his rare holidays. It was our last night in the ranges and, though a quiet guy, he was full of stories about his travels, the trails and his life as a Department of Conservation ranger in Mount Cook National Park. “Amber grew up in those mountains,” he told us. “She went to school in Mount Cook Village.”

As two city kids, Mat and I were intrigued. So when we arrived at Mount Cook for a week of walking and running without our rucksacks or a real plan, we headed straight to the visitor centre to see if Ray was around. He wasn’t, but he’d been there just that morning, the lady told us. “He was around for a few hours talking to visitors about the area. He’s full of information, you know.” We knew.

The next day, after a morning of running, we headed back to the visitor centre for free WiFi and a weather update. The lady spotted us. “Ray was in this morning and I told him you dropped by. He said to write your phone number down and he’ll give you a call.”

The very next day, my phone buzzed – it was from Ray: “Call in any time at [address] to stay if you want or showers, laundry, dinners. If I am not home, txt – won’t be far away as am on standby for rescue.”

Fantastic! We quickly replied saying we’d be over that afternoon. His offer of food and cleanliness was wonderful, but we were more interested in an afternoon picking his brain.

A couple of hours later, after a particularly sweaty run up 2,200 steps to the Sealy Tarns, we knocked on his door. Turns out he is the manager of the search and rescue effort here in the park and, while on standby, he isn’t allowed to be more than 15 minutes’ walking distance from the emergency services building. That day, he’d already oiled his deck, gone for a run and watched the rugby sevens to keep himself entertained.

Over the next couple of hours, he took us on a tour the facility, which is just around the corner from his DOC-owned home. The first room looked just like your average office meeting room, but the oversized map of the national park, with its detailed peaks, glaciers and ridges, gave away it’s true purpose. This was the SAR strategy room, where the team would gather and work through the rescue effort.

“We rescued an American girl from near Mesopotamia just the other day,” he said. “She was doing the Te Araroa too.”

Mat and I looked at each other in penny-dropping realisation. Ray was in the team that rescued a TA NOBO tramper we had met just last week. Like us, Virginia had set off from Stone Hut on Australia Day, but travelling the opposite direction. A few hours later, while we were summiting the highest point on the trail at Stag Saddle, Virginia mis-stepped on the trail down near Bushy Stream, fell and dislocated her shoulder.

When she hit her personal locator beacon, it was the Mount Cook team that responded. Virginia’s details and location coordinates would have been the focus of the strategy room we were standing in, while the chopper set out to find her.

That, Ray assured us, was one of their easy rescues.

Since Christmas, there has been a number of fatalities in the park, including a Melbourne couple who fell while climbing the 3300-metre high Mount Silberhorn and 29-year-old Australian, Nicola Anne Andrews, who tragically fell while climbing The Footstool. 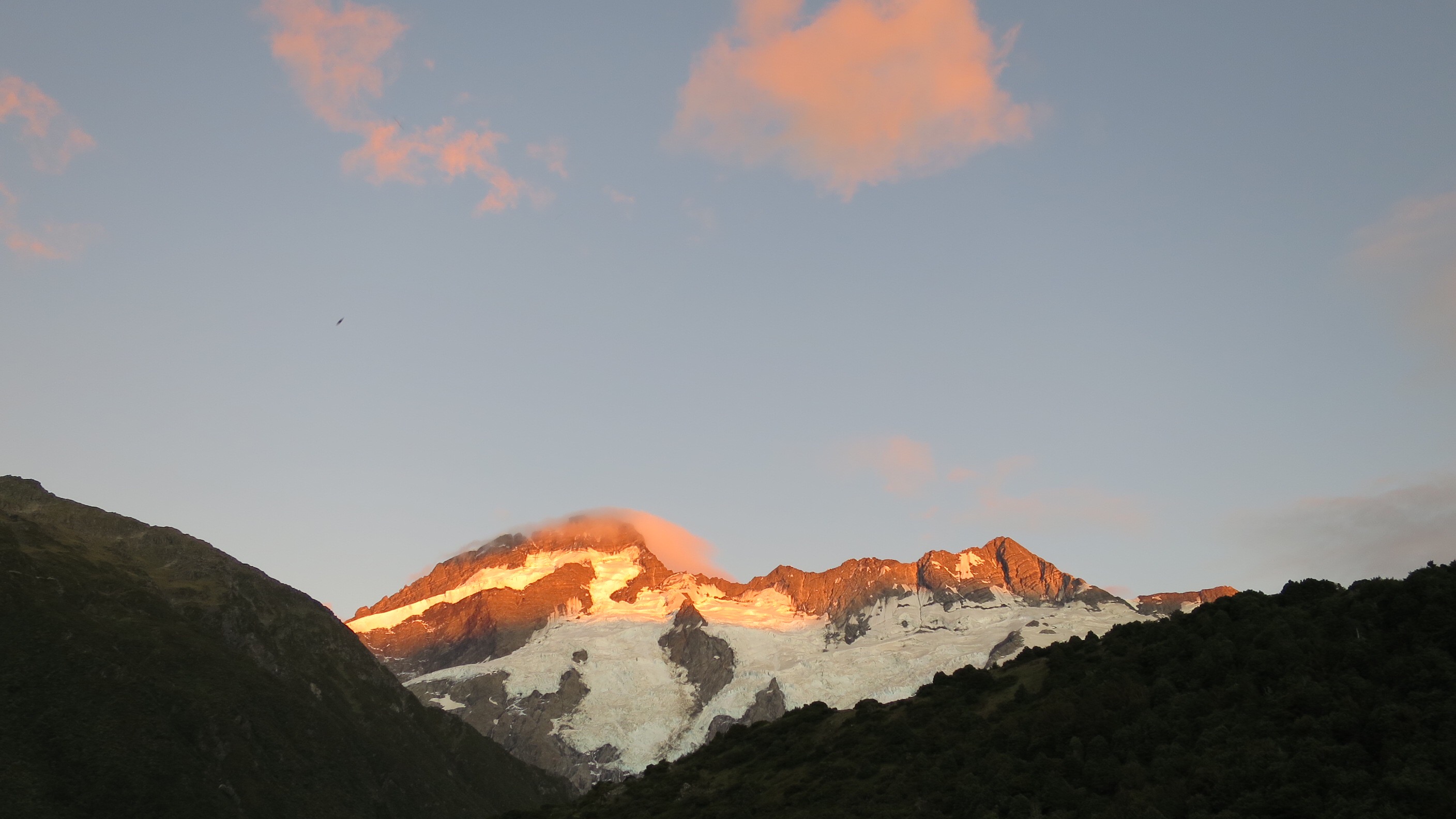 The latter hit home harder than usual with Ray – his daughter is the same age.

The next room was lined with lockers, each filled with climbing apparatus, fleece tops, heavy thermal jackets, water bottles, camping gear and more. Just like in a fire station, everything was ready to go.

Next door, in the first aid room, we found out Ray is a qualified paramedic. We shouldn’t have been surprised – it seems you need to not only love the outdoors but also be incredibly skilled and highly trained to do what Ray and his team do. As a pre-requisite, he told us, you need first aid training and a high level of mountain climbing experience, not to mention the relentless maintenance of your fitness and climbing skills. DOC gives a special holiday allowance for climbing and training, and the team regularly race each other to the top of the local Red Tarns track.

Still reeling from our meeting, the next day we ran, scrambled and sweated to the top of the Mueller track. Just as we reached the beautifully located Mueller Hut, the sound of a helicopter echoed around the mountains. We looked on in trepidation as it came into view and landed beside the hut.

Fortunately, this time, they were here to empty the toilets. But in our eyes, even that’s a heroic task.

One thought on “Search, rescue and toilets at Mount Cook”