There’s a sign as you come into the old ghost town of Newnes in Wollembi National Park promising “Everything money can’t buy”. It might be a snipe at the neighbouring Emirates One&Only resort, where rooms start from $1,720 a night, but there’s more truth to the statement than you might first think.

Driving along Wolgan Road, Mat and I weren’t sure what to expect from our visit. The previous day, we randomly picked Newnes campground as our next destination because a) it’s free, b) it’s vaguely on the way to the Hunter Valley from Katoomba, and c) the map shows walking trails. That was the sum total of our research.

After a quick stop at Aldi in Lithgow, we turned right off the Castlereagh Highway onto a sealed road. This was our first surprise, as the map showed a dotted line for an unsealed road (not that we were complaining about the smooth drive).

The road started dropping steeply and the Old Girl’s comforting ticking echoed around the rocky valley walls. Every few kilometres, we’d sail past a sign for “Emirates One & Only” and muse over what it might be.

After 20 kilometres, we trundled past the entrance to the resort and two metres later we were greeted with an unsealed road. Thanks Emirates. For the next nine kilometres to the campground, we rocked and swayed and tumbled over the dusty, rocky road thanking our lucky stars that no rain had visited these parts over the past week.

The sign for Newnes couldn’t have come soon enough for the Old Girl. And Mat and I grinned at each other. There were holiday cabins and what looked like a pub and general store. We were expecting a basic campground as our home for the next few days. Things were looking up!

We soon found out there are no shops or pubs in Newnes…any more.

A little over a century ago, Newnes was a thriving town full of miners and their families. Built as a hub for oil shale mining, it was the heart and soul of the Wolgan Valley. At its peak, it had 800 residents. There was a school, shops, a billiards-hall and hairdressing salon. Workers would head off to the large-scale oil refinery in the hills.

But the industry wasn’t as successful as prospectors initially predicted. And the final nail in the coffin came when the company was faced with competition by cheap American kerosene and petrol. The mine closed and families moved away to seek work elsewhere. By the time the mine closed in the late 1930s, there were just four families left.

Fast-forward 100 years and the township is inhabited by just three permanent residents. The railway is in bits. The forest has reclaimed the site of the oil shale mines. And the Newnes Hotel, once painstakingly moved plank by plank across the road by the town’s residents after a flood, has long surrendered its license to serve alcohol.

But look past the rundown hotel and Newnes has heaps to offer for campers, hikers, runners and families.

On paper, it’s simply a flat reserve with drop toilets, fire pits and picnic benches. But the best part is you are in a deep round valley, surrounded by red gorge walls. The valley spans approximately 26 kilometres long and seven kilometres wide, formed by the Wolgan River cutting a deep gorge through the sandstone. Kangaroos and red-necked wallabies munch on the grass, slowly edging closer and closer to check out your digs. Possums eye up your rubbish bag, waiting for darkness to fall. And sleepy wombats stick to the boundaries of the forest, which surrounds you, waiting to be explored.

Explore is exactly what we did. The first morning we went straight up. And up. And up. Mat wasn’t satisfied until we’d reached the top of one of the surrounding rocky peaks. There we sat inside a humungous sandstone cave and watched the morning sun creep across the campground far below us.

After running back down through the forest like kids, we jumped on the bikes and rode the long 1km to Newnes Hotel, now a museum and weekend-only kiosk. It was midweek so we took a minute to look around the modest museum to get an idea of the area’s history.

But the best way to understand Newnes’ fascinating past history is to get within it. So we hopped back onto our bikes, only to get off again two minutes later to carry them across the river, and found the start of the “Ruins Walk”.

The walk winds around the old shale mine with markers explaining what’s what. Long rows of coke ovens make it easy to imagine the workers here just a century ago. Ninety beehive kilns were needed to create the coke for the Newnes boiler plant as well as the iron works in nearby Lithgow. Walking around a little further, a pile of bricks marks the workshop area, The whole site is a living museum, gradually being reclaimed by the forest that was cleared to create it in the first place.

I suppose this is what they call the circle of life.

The next day, the Pipeline Track was calling us. The trail traverses 10km between Newnes and the small town of Glen Davis in the Capertee Valley. It follows the old pipeline built to connect the two towns after the oil shale works at Newnes closed down in 1932. Look closely and you can still spy remains of the supports for the old pipeline amongst the entangling ferns.

Hopping over Petries Gully after cruising along the first 2kms, the sign warned us that the track will be steep – it wasn’t lying! Zigzagging up the deep sandstone gully, we slowed to a walk while lyrebirds jumped up the rocks ahead of us. Show-offs.

Scrambling the final section to reach the top, a sign to the Pagoda Lookout tempted us off the trail. After following a rocky ridge, we found ourselves standing on the top of the rocky cliffs looking out over the spectacular Wolgan Valley. And we couldn’t help but agree: this really is everything money can’t buy. 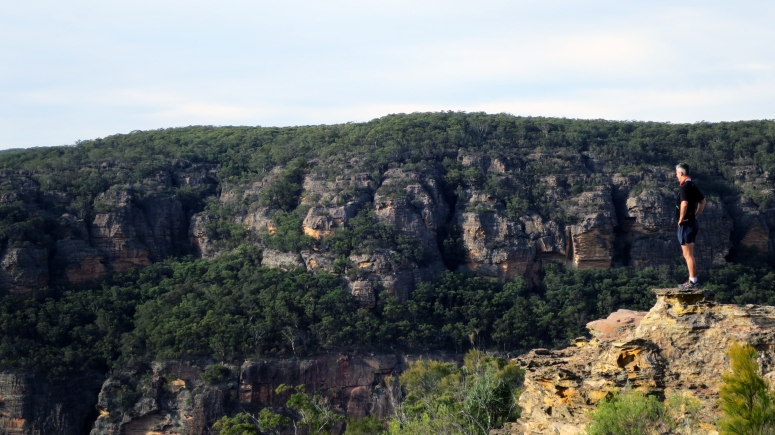