We pulled into the driveway and had just killed the engine, letting the Old Girl’s iconic tick, tick, ticking come to a shake and a stop, when a tall guy in jeans appeared from the side of a warehouse to greet us.

“You found us okay, then? I’m Darren,” he said, extending his hand. I shook it and introduced Nicki, the Old Girl and myself. “Welcome to Lismore Art Space – let me show you around.” 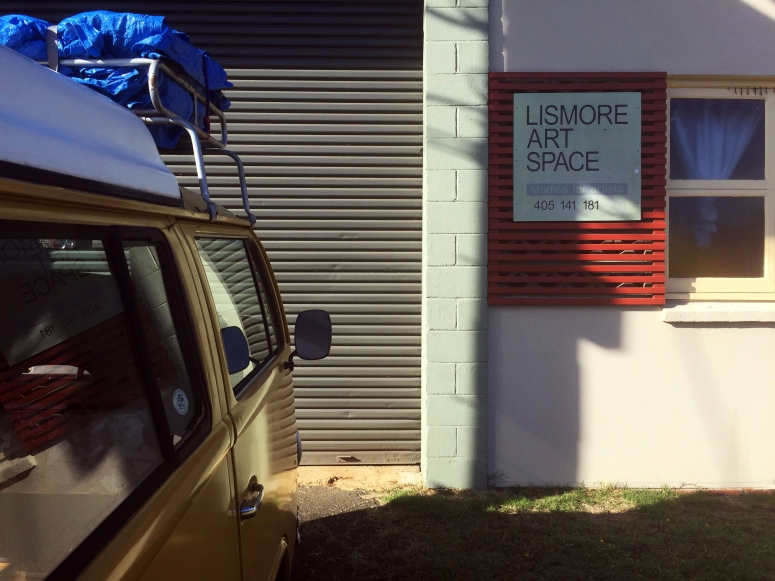 We walked through the side door of the warehouse, only to be greeted by a very excited dog on wheels. “Wow, he can really move in that thing!” I said “She certainly can!” came the reply from a woman in a hot pink jumper walking towards us enthusiastically. “Jo,” she said. “I’m so pleased to meet you!” 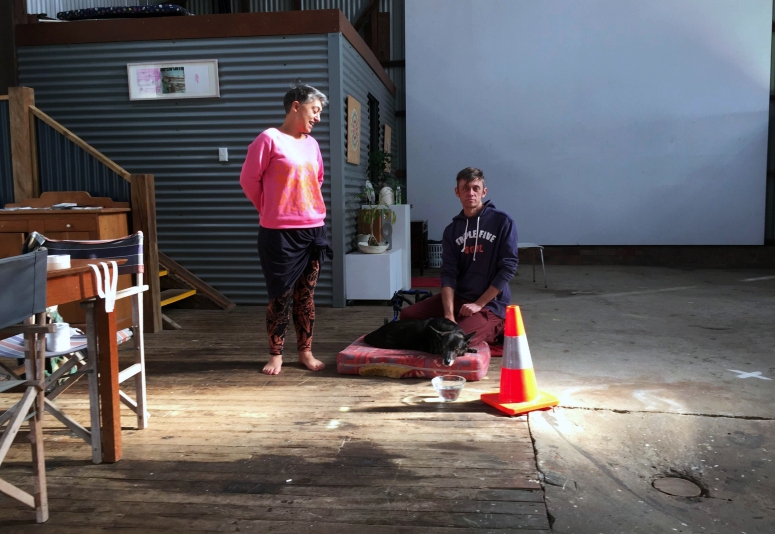 We’d come across Jo and Darren online while researching the arts in Lismore. I invited them to take part in some “Kombisations” in the Old Girl so we could get an insider’s look at what the local art scene was all about.

What we found were two very passionate, very generous, very interesting and interested people. Over a cup of tea, Jo and Darren told us about what the printmaking studio was about and where they were taking it, their dreams and challenges. Jo was about to leave to meet up with some creatives in Sydney to discuss how they could implement something similar to the Lismore art space and Darren was busy making art, and marking students works from Southern Cross University, where he’s the Head of Printmaking. And if that wasn’t enough they had just received delivery of new silk screens and were pretty excited about getting started on some new prints… the space was full of energy. 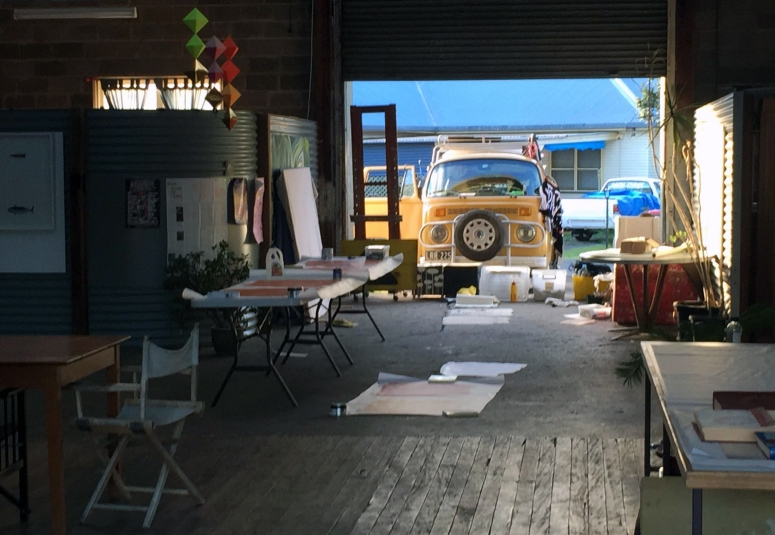 No question about it – Jo and Darren was busy. I get the feeling they are always ‘doing’ but it didn’t stop them from offering me and Nicki a creative space to spread out, make some art and writing out of the Old Girl (she didn’t mind…), and critically, out of the wind and rain.

They generously shared their printing making facilities, internet, power, hot cups of tea, and really constructive intelligent conversation. All this with a smile – and you can’t help but laugh when Jo laughs, it’s contagious! 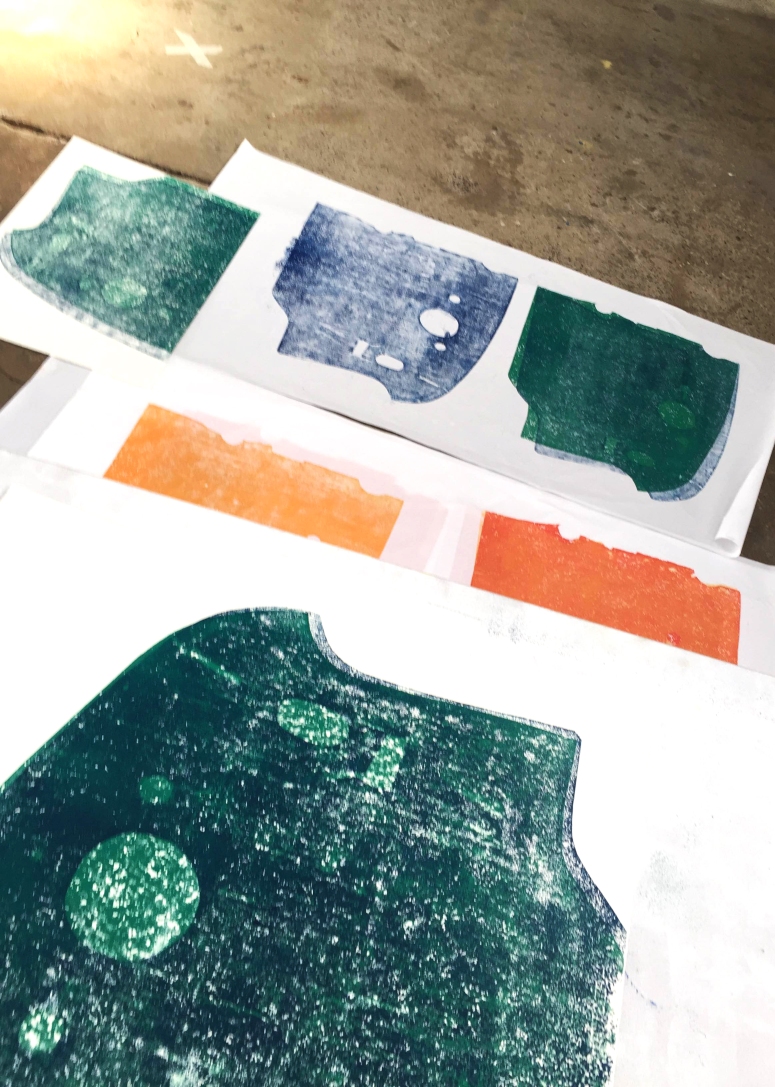 In the first afternoon alone, we covered a lot of ground, identifying and solving the world’s problems, the Australian Art scene and how to go about getting funding for projects to “Just how good is Radio National!” But more importantly we connected. We found common ground in the love for the process of “making” in art. Nicki and I fell in love with Abby, their studio dog, named after Abigail from Ruth Park’s Playing Beatie Bow, a novel that was part of Jo’s and my childhood. Growing up in Sydney, she was familiar with The Rocks area where the story was based and she just didn’t get into football all that much, instead found “big flowing dresses much more interesting”.

Between conversations, I was pulling apart the Old Girl and, honestly, making a bit of a mess in the studio. Darren watched as I inked up different shapes from the Kombi’s floor, pressing the inked up parts into paper, and suggested I check out a few different artists. 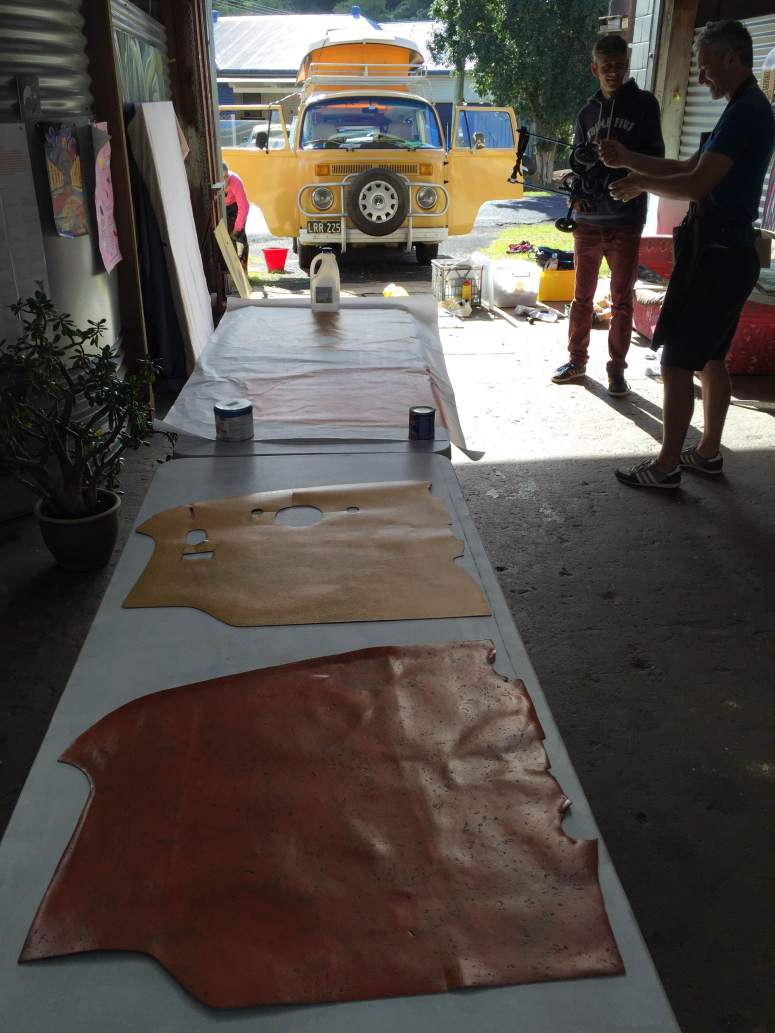 After three days of printmaking, tea and kombisations, reluctantly we knew it was time to move on. Jo, Darren and Abby farewelled us with big hugs and an open invitation to return again soon – sooner still if the rain returned!

Find out more about the trio and their projects at Lismore Art Space and Ms Browns Lounge.