Steve and Mark are the kind of guys that inspire respect, while also making you roll your eyes and laugh. They’d take off in the morning to kayak down the river. Then, return to their double tent set-up and spend the rest of the cool but sunny afternoon drinking a box of Berry wine (but moaning all the while about hating it) and watching the world go by. One sunny afternoon, we were part of that world.

We met Steve and Mark in Kangaroo Valley. Mark wandered over when he spotted Mat hunched over his printmaking table. Mark, a keen artist and cultured kind of bloke, wanted to know what Mat was up to. Steve didn’t want to miss out on a good yarn, so he too wandered over and started by telling us how it’s “just great watching you two work together so peacefully.”

Within seconds we were invited over to their campsite for a drink and chat. What transpired was a fascinating 4-hour kombisation with these two friends. (By that time, we’d had quite a lot of Berry wine).

Hearing Steve and Mark talk is like watching a Mexican wave. One flows off from the other’s sentence and continues until the other picks it back up again – the way only old friends can.

Here’s a little dip into that evening:

Act 1: Getting to know you

Steve: So, where are you off to after here?

Mat: Into Canberra for a day to see some of the galleries

Mark: And the portrait gallery…they’ve got the Blue Poles.

Steve: I love Blue Poles. How much they paid for it…

Steve: What did we see down there, we went down there to see this bloody brilliant artist – you see my mind’s gone –

Steve: No not Fred, he’s brilliant but noooo…

Mark: Turner. Fred is my favourite artist but we went down there for Turner; that was quite a lovely exhibition.

Mark and Steve break to refill our drinks and talk us through their set up. They have two big tents with zip-on walls creating a patio-like area. Between the tents, they’ve set up a kitchen area with hotplates and iceboxes. Well-loved kayaks are poised on the roof of Mark’s 4WD.

Act 2: A lesson on reptiles and amphibians

Nicki: We haven’t been to Katherine, just Darwin and Lichfield.

Mark: On the river, with the hot springs.

Steve: Did you do the hot springs?

Nicki: No, we didn’t. I think it was too hot for hot springs!

Steve: Did you go to Elsie Station?

Mark: That’s where we did We of the never never, you’ve probably heard of the book

Mark: It’s a real old movie, ooohhhh what characters… it’s an old like 1940’s movie with… and you can see all the stereotyping with the aboriginals and the way the Caucasians talk with the abos.

Steve: It was lovely to see her and the way she reacted to them, that was amazing. But the problem with it was that every day at 12 o’clock in the bar – every day of the year – they play we of the never ever. So it’s like de ja vu every time you go there.

Mark: And they serve barramundi burgers.

Steve: Well they’ve got wild barramundi up there. But if you walk though…you can stay at the caravan park at Elsie and there they’ve got the hot water springs as well and they’ve got ummmm bat water, water that you spray into the trees to stop them getting into that area. And it’s all lit up at night so you come into that area and you can actually sit in the beautiful spring water and just feel like you’re washing away your dirt. And it just moves the whole time. And if you move around the corner from Elsie, there’s another place called Douglas Springs?

Mark: Douglas Springs is, yeah, just a little bit down the road.

Steve: And Douglas Springs has got like – when we got in the water there, me and Mark and another guy called Russell, you just sit in it and just sort of float down and you’d swear you were some sort of commando in Vietnam.

Mark: And they’ve got the wattle trees and you pull off the leaves and you rub them like that and there’s your soap

Steve: It’s the leaves themselves.

Mark: It goes soapy. Oh so many nice places…

Nicki: But there are no alligators or anything? Sorry if that sounds really naïve!

Mark: Oh yeah just before we went there, they did have a scare yeah. The fresh water crocodile they’re sort of timid but they can still have a bite.

Nicki: I don’t know if it’s something I’d want to risk.

Steve: No you wouldn’t worry about them, they are so timid, you try to get up in the middle of the night or the morning and try and walk along (not that I get up early in the morning), and try and walk up through and see if I can actually see them because they used to bask in the sun. And they jump right in the water

Mat: So they’re quite scared then.

Steve: But not the salt water buggers.

Mark: Jeez, well up here you’ll see the big goannas walking through, lacemonitors, you know six or eight foot long some of them.

Steve: Beautiful. You’ll come across them in the strangest of times. I was lying down and having a snooze years and years ago and I woke up and I looked and thought there was like Godzilla right in front of me and I thought my goodness! And I jumped and realized it was simply a six-foot goanna and as soon as I moved it shot up a tree.

Nicki: And they’re not dangerous are they?

Mark and Steve: Yes if they bite you!

Mark: The bite can leave bacteria – there’s so many germs in the mouth.

Steve: What bout that snake, tell ‘em about that bloody snake.

Steve: In Meroo we were, we walked this – and I know it was a fair way away from Mark but I was up close and we both stood on this friggin snake at the same time, black snake, and it came up like this.

Mark: We didn’t really tread on him…

Steve: Bloody hell, bloody hell. And I’m thinking to myself, eat him not me, bite him not myself, (laughs). But absolutely beautiful, sensationally beautiful looking things.

Mat: From a distance

Steve: No they are sensationally beautiful. Like once you’re not bitten and you look back, you think – God, that was beautiful.

Steve gets up and offers us jaffles. Our stomachs answer for us – we haven’t eaten since midday. So for the next hour, we eat baked bean jaffle after jaffle after jaffle. Except because by this time we’ve devoured quite a lot of Berry wine, some of the jaffles accidentally ended up empty. 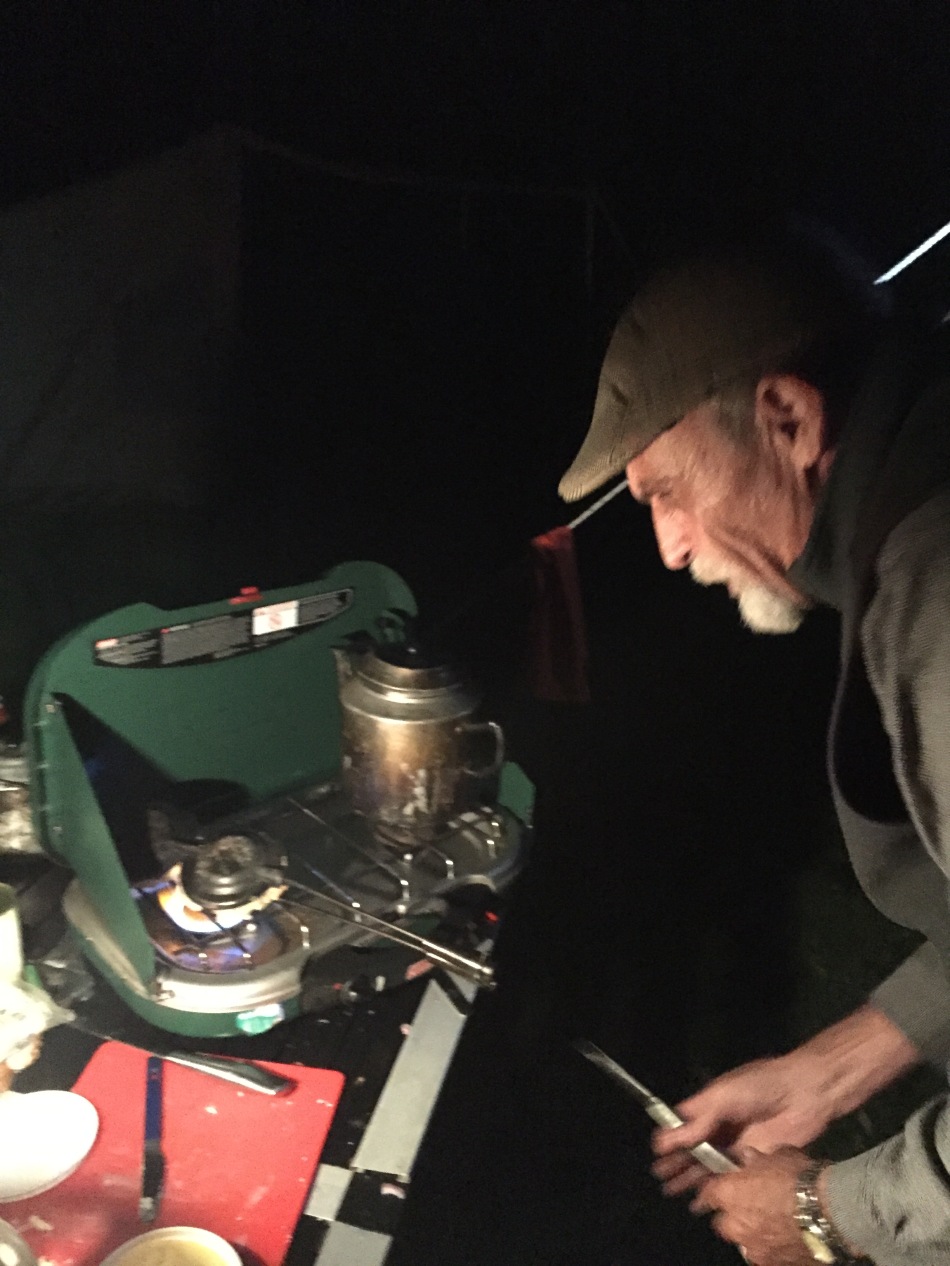 Steve: One of the best things that happened for years, it was my saucepan unfortunately. We had this all covered [points to kitchen] and a bloody wombat came in the middle of the night and actually shat in the frypan.

Mark: No that’s not what happened. The frying pan was turned over so…

Steve: You know the story about this place, why it’s all closed up? It’s a very sad story. This area, you used to be able to go down by the water and camp. This has only happened in the last year.

Steve: And they’ve put all these rocks around for a specific reason other than you think. And they’ve got security and there’s video believe it or not…everywhere.

And the reasons for it…Mark will tell you while I light a cigarette.

Mark: They had some people came in and …well one car… and of course all the wombats graze over the whole park. He went around and killed the whole lot of them. There was outrage. And all the local people were just abhorred by it and they never found the culprits.

Mat: He just went around and killed them all?

Mark: Drove over them.

We left them late that night, knowing we had to pack up and leave early the next morning. Before we hit the road the next day, they came over to say their farewells, enjoy a taste of Mat’s cold brew coffee and donate a whole load of goodies for our onward journey..

0 comments on “Two guys, the Old Girl and lots of Jaffles”