Okay I confess – signing up to the Wilsons Prom 60km trail run probably wasn’t my finest hour. We were straight off the back of a month-long trek in Nepal. I was still waking up every morning expecting to find myself wrapped in my now-smellier-than-acceptable sleeping bag in a damp Himalayan teahouse. Now, less than a week after skidding onto the Tullamarine tarmac, we were swearing at boxes full of running stuff trying to remember where we put the snake bandages.

Why were we losing our shit about snake bandages? Because Paul Ashton had just posted this on Facebook:

Until this point, I was freaking out that we hadn’t run in over a month. Unless you count sprinting between the bed and squat toilet on day three of our trek, while simultaneously cursing my choice of lentil curry for the past five meals (it was just so damn delicious!).

Now Mat was convinced the snakes were out to get us. I remained more worried that, if they did decide to chase us through the Prom, our legs might not remember how to run away.

After finally digging out what we considered to be enough compression bandages to mummify Mat before the run, we jumped in the Kombi and hit the road.

Only three hours from Melbourne (four in the Kombi), Wilsons Promontory is where lush forest meets rugged beaches along a long curvy coastline threaded with a labyrinth of walking tracks – all just far enough away from civilisation to be perfect. It’s a wonder we hadn’t signed up for the trail run sooner. 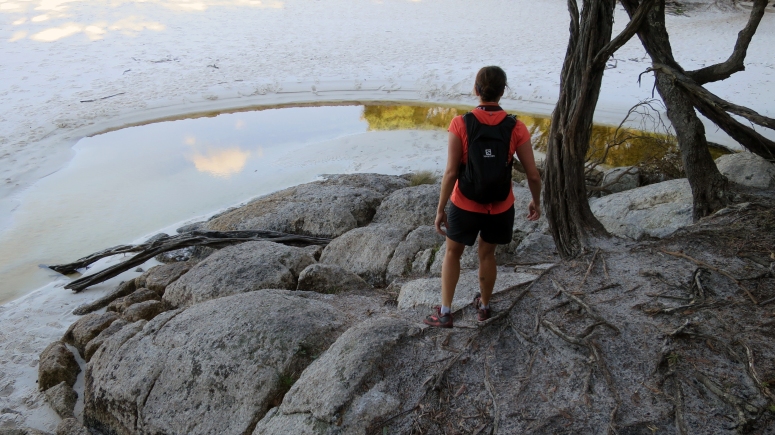 Actually the reason is simple: every year, we hear horror stories of how runners are washed along the beaches by a havoc of incessant rain and howling winds, only to dip back into the forests and haul their miserable arses through muddy flooded trails for hours.

But, really, how many years can one event be unlucky with the weather? It has to come good eventually. Willing to take our chances, we signed up.

Back in Melbourne, we were watching the weather app with trepidation. Our ultra buddy Gayle Cowling, a Prom veteran with five runs under her belt, even emailed us with a warning. “Weather seems to be changing its mind at the moment but plan for rain down at the Prom no matter what,” she cautioned. “The Prom is not an easy run.”

And so, loaded with waterproofs, snake bandages, and a mountain of tiny plastic sandwich bags, off we drove towards the Prom, our spirits warmed by the autumn sun and promising blue skies.

A quick stop in the dairy capital of Leongatha gave me a chance to buy another gargantuan compression bandage (you can ever have too many), and by lunchtime we were enjoying soup and chips in the charming Tidal River campsite – the very same place we’d be setting off from in the dark the following morning.

Our run strategy, if you can call it that, was simple: find our running legs. To have any hope of cracking a 100 miler this year, we needed to hit the ground running and running and running and running. While we thought we might gain strength by hiking up to 5,420 metres altitude in Nepal, somehow we had returned feeling sluggish and unfit. Eager to see how we were tracking, we’d tested our legs along the beach trail the day after landing, only to wind up in a coffee shop. That’s not unusual, except that we’d only run six kilometres.

So if we went to bed a little nervous in Tidal River, that’s why.

Next morning at 5.45am, we were standing at the start line blinded by headtorches listening to race director Paul give us an update on the weather. I can’t remember exactly what he said – I’m not sure my pre-caffeinated brain could comprehend anything except the words “gale force winds”, “torrential rain” and “hail storm” – but I know the outlook wasn’t good.

Less than two hours in, we hit Sealers Cove surrounded by orange skies. Not a cloud in sight.

But this was no time to be complacent. Who knew how long it would last? The same thinking applied to our legs. Mat and I were feeling good. Neither of us were aching. We were smiling, talking and laughing – a lot. Now we just needed to find way to make this feeling continue for another six hours.

Lucky for us, there was a river crossing ahead. “There’s nothing better than cold water for tired muscles!” shouted Mat as I waded through waist-deep water, holding up my shorts and grimacing for the camera. 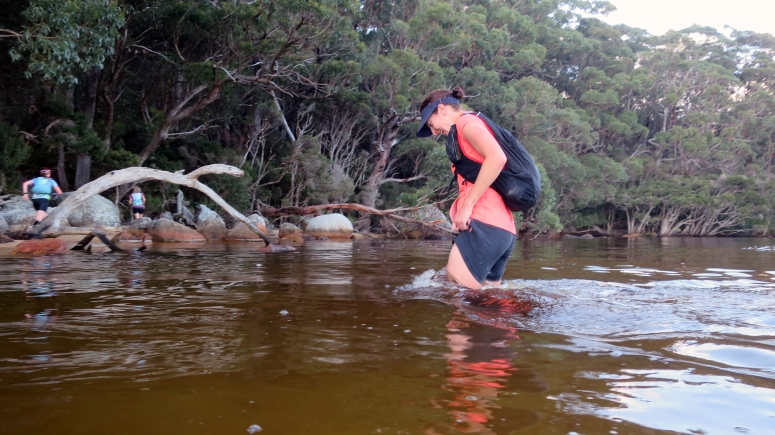 A couple of hours later, at the Roaring Meg junction, we spotted our first cloud hovering over the lighthouse. At the same time, our legs were starting to tire. “How much further?” we whined to Gayle, like kids in the backseat of the car, as we heaved ourselves up the 800m climb to the turnaround point. Suddenly 60km felt like a very long way. 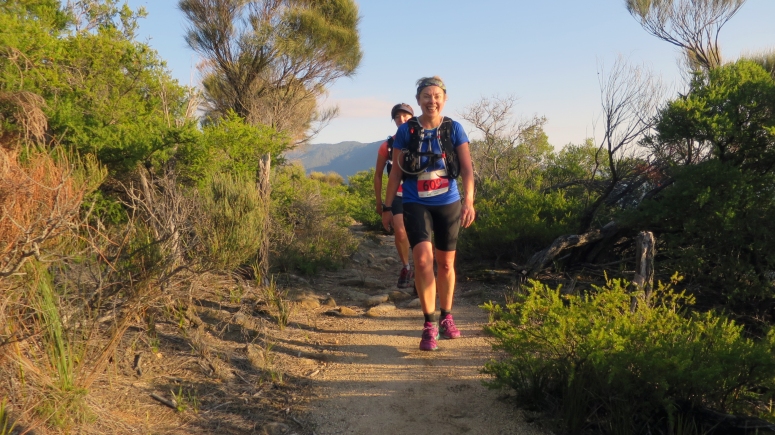 To add to our self-indulgent misery, the wind was picking up, though it wasn’t until we came over Telegraph Saddle and down into Oberon Bay, that we found out quite how much. Sand and rain whipped around us and pummelled into our bare skin with full force. Running became impossible and we dragged our battered bodies to the end of the beach and hid in the shelter of the trees to see if the sand had managed to impale our bodies and eat away at our soul. “I feel like I’ve just been in a washing machine!” Mat yelled over the howling wind. Taking a deep breath, we found the trail and carried on. 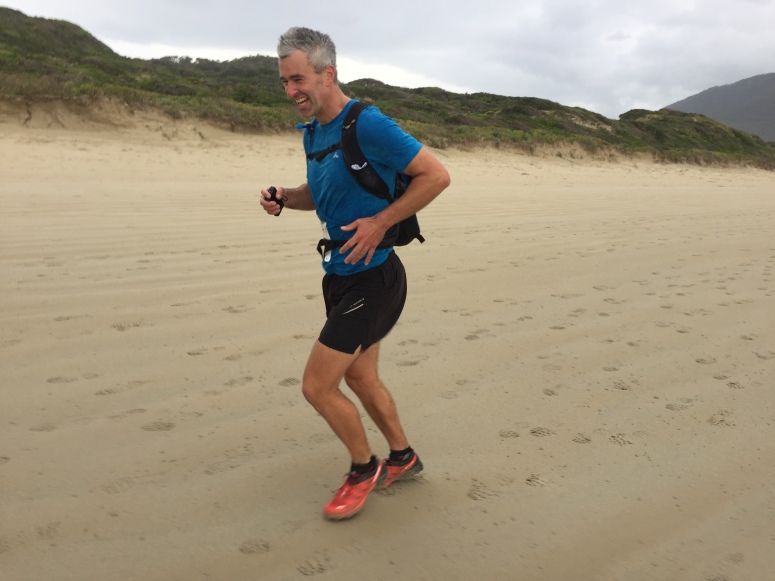 Just seven kilometres later, we were back on the sand. This time, we could smell the finish line. We could even see the flag marking the beach exit. With one final push, and just a few swearing fits that were swallowed by the wind, we dragged ourselves across the line to claim our chocolate reward.

“That wasn’t so bad,” I tried to convince Mat (and myself) as we shivered back to the Kombi to pour ourselves a couple of vats of red wine. “Maybe next year we’ll sign up for the hundred.” And as we shut the door, never again to emerge, the heavens opened.