We went to bed knowing today would be a huge day, but we didn’t know how huge. The guidebook says it’s a 9 hour day for 18km (gives you an idea of the elevation!) but with only two days left on the trail before we have to make hay for our flight, we couldn’t afford to stop at 18km. We needed to cover at least 25km. Sure, that doesn’t sound like much when you consider what we might normally run, but when you add in some of the steepest elevations in the Pyrenees, trying to carve a route through mist and overgrown fields, and carrying a bag full of food, it’s pretty tough.

Before we left the incredible free accommodation, the Spanish salesman told us the weather report: rain in the afternoon. The village was covered in clouds, and as we took our first steps up the hill it was clear that his report would come true sooner rather than later. (it’s raining as I write this!). We were walking into the storm.

But the first climbs to Col de Gamel and Pla de Montcamp weren’t as steep as we thought. Or they were, but we’re just getting stronger. We did lose the marker a few times, though. Cue the GPS and Mat’s confused face.

Getting back on track, we found a hut. But not just any hut – this was one of the famed huts filled with goodies especially for hikers. Let me explain. A couple of extremely savvy or thoughtful (I can’t decide which) locals have taken it upon themselves to stock up three Ariege hikers’ huts (cabanes) with food. As I’ve explained before, the Ariege section is pretty remote and you have to plan ahead if you want to eat. But to make life easier, these guys have stocked a few of the huts with canned / dried goods. Then, you send the money by cheque or, better yet, pay by cash when you reach the next refuge. Genius! 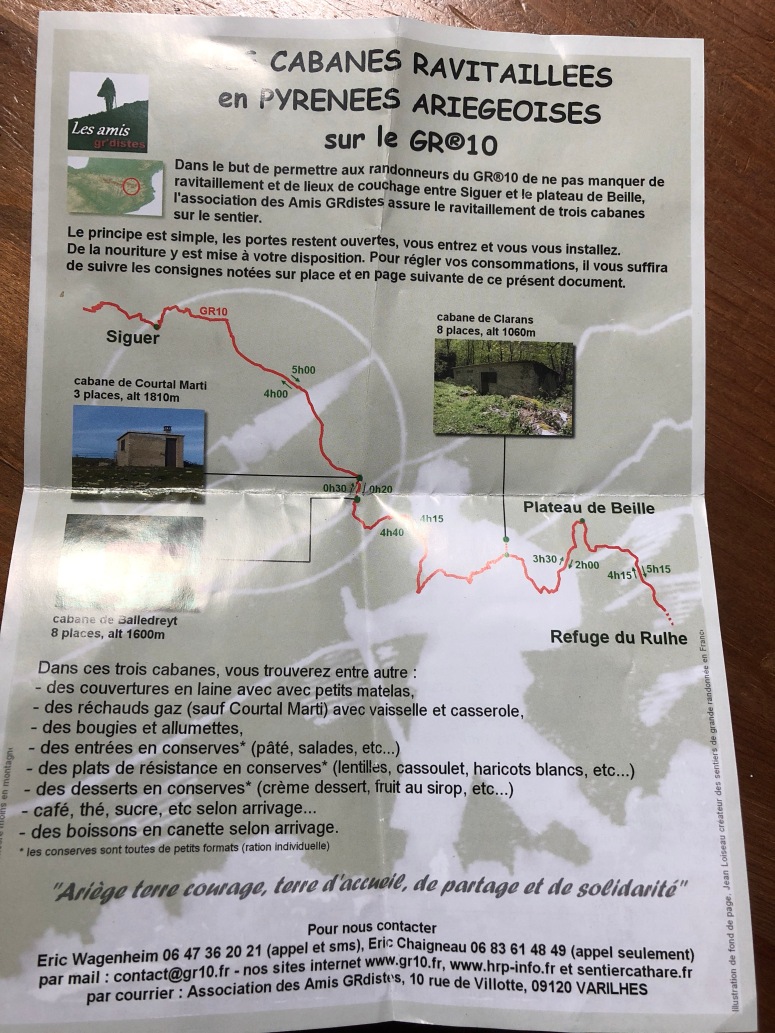 When we came across the Cabane de Balledryt, we were like Hansel and Gretel stumbling upon the gingerbread house. The tiny bench was overflowing with tinned ravioli, beans, pasta salads, chocolate puddings, coffee and tea, and more. There was a stove with gas, cooking utensils, blankets…the works.

It was only 10am, but after the climb we’d worked up enough appetite for a couple of chocolate puddings and stowed a tuna rice salad for later. Mat ate a sachet of cappuccino mix in desperate bid for caffeine, then realised he could have mixed it into his pudding.

I scoffed at his coffee eating, but then ate my words when we reached the next climb… it was super steep. We sweated through the forest for an hour, then ran down through the forest on the other side, not caring which of the myriad tracks we took to the bottom. They all went to the same place.

The next hut was locked (maybe they found that too many hikers were eating the coffee mix) but we were keen to move on anyway. It was only noon and we had already smashed out the 18km. If we pushed up the next 500m ascent, we could maybe make it to the ski resort of Centre d’Accueil du Plateau de Beille, which was rumoured to be open in summer. That meant REAL COFFEE!

Our legs screaming, we hauled ourselves up the mountain, racking up more than 2500m elevation for the day. But the rewards were sweet, so sweet: a myrtleberry tart and Carte D’or ice cream. So much for remote Ariege!

By 3pm, we’d licked the bowls clean and were marching along the vehicle track to a hut. The first hut was being used by a shepherd, so we moved to the next, which was locked.

“Shit. Well, maybe it won’t rain too much. Maybe it will just drizzle,” I prayed aloud.

Exactly five minutes after our tent was up, the rain came. But it was light, so we moved into the tent and listened to podcasts not worried about any tent leakage.

Then it got a little stronger. The lightening started. The thunder crashed above. The tent was starting to drip…inside.

Just as we started to relax, the familiar pitter patter of rain started to drum on the tent again. Within 30 minutes, we were in the eye of another storm.

This pattern continued until 3am. By which time, my side of the tent was flooded. The inside of the tent wall was dripping with rain. There was a small swimming pool our feet. My inflatable Sea to Summit sleeping mat had a mini swimming pool in each dimple. I huddled into Mat, squeezing onto his sleeping mat in the vain hope it could comfortably hold two of us for the night. This was NOT a well-thought out plan. Our sleeping bags were sodden, our feet wet, Everything from my side of the tent was pushed as far over to Mat as possible. I didn’t know whether to laugh or cry, so I tried to remember any night worse than this and came up with the time we slept in a Guatemalan hostel with holes in the walls and the sound of rats scratching, while I ran to and from the bathroom with diarrhoea and vomiting. This was some consolation.

By 3.30am, the final storm passed and there was an eerie silence. We took a chance and emptied the water from my mat so I could at least give Mat room to turn over.

Settling onto my damp mattress, covered with my raincoat, sleeping bag discarded, I finally started to nod off. Not ten minutes later we were woken by a sound. A familiar sound. The sound of munching. And grunting. A herd of about 15 horses had surrounded the tent, which happened to be pitched in the middle of their nightly commute. As Mat shifted to get his torch, the horse closest to us freaked out, neighed and ran, which prompted the rest of the herd to run. I’m not sure if you’ve ever been in a tent while listening to horses gallop but it is absolutely terrifying. We saw our lives flash before our eyes as we prayed that the horses wouldn’t accidentally trample our tiny wet green tent and us.

They didn’t (obviously). But we weren’t taking any chances. In a 4am brainwave, Mat left the torch on so they’d at least be able to see us.

And finally, we slept.